This year I am getting married. Again. I am an eternal optimist.  Also I am marrying the man I should have married decades ago, so I it’s not a third chance but a first chance delayed.  Having been married almost three times, I have learned a thing or two or 8,536.  I could list them all out here in black and white but it wouldn’t matter, you just have to learn these types of things for yourself, a.k.a “the hard way”. I do believe that you can gain some true insight into your future relationship by participating in premarital counseling and I highly recommend you discuss important topics like finances, kids, household chores, sex, in-laws, etc., as soon as possible and at length.  But let’s face it, when you are calm and rational it’s easy to theoretically talk about things that don’t exist yet.  If you want to really know what you are in for, I can help you get down to the relationship basement. 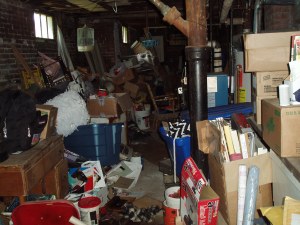 The basement is where you keep all the stuff that you have forgotten about, the stuff that just sits there and collects dust until you have to retrieve it for a particular reason and find it’s dirty, full of cobwebs and a family of mice.  The basement can only be exposed by circumstances.  Those moments when you have no choice but to just open up the boxes, dirt and all.

If I had my own premarital counseling it would consist of the following tests.  If you pass, then skippity do dah down the aisle as fast as you can.  If you don’t, then you might want to consider skippity do dah’ing with someone else. 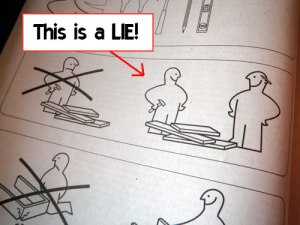 Partners must assemble Ikea furniture, in an hour, together. I’m not sure if there are statistics on this but I would bet that at least one couple has actually divorced over Ikea furniture assembly.  Those Swedes make it look so easy but in reality it is the equivalent of the Kobayashi Maru (the no-win scenario for cadets in Star Trek).  No one wins here.  There will be anger, possibly blood shed, something might get broken, tears will be spilled and there may be a lot of cursing.  It’s not pretty.  But if you can survive putting together Ikea furniture without hating the other person, the odds are in your favor that you can work anything out. 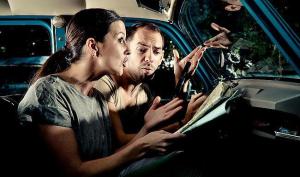 Partners must get in a car together.  One person will be chosen to drive.  You will have to READ a map that has been given to you and drive to an unfamiliar location.  If you have ever attempted this, with anyone, you know that this scenario can cause a civil war that even Abraham Lincoln couldn’t win.  Each of you may end up questioning how the other actually functions as an adult human being given their clearly deficient capabilities in either driving, navigating or following directions.  Being trapped in a moving box with someone who isn’t doing what you want them to do can really deliver the truth on your ability to communicate.  If you survive this situation without wishing that you could push them out of the car and leave them on the side of the road, then chances are in your favor for a blissful union.

3.  The Who Made This Mess Test

Partners are placed in a very messy/dirty room.  They have one hour to clean the room thoroughly together. This task alone will cause serious emotional regression for most people. The way each of you cleans, or doesn’t, is going to be a good indicator of exactly how many arguments you are going to have and how much of a bossypants you really are.  Seemingly calm and rational people will start channeling the colloquialisms of a Drill Sargent.  Your definition of “clean” will be put on trial.  Someone’s mom will be brought up.  The ability to fold clothes will be questioned.  One of you will discover you care less about this exercise than the other. If you aren’t filled with disgust by the time the test is done, you have a fighting chance at wedded happiness.

But if you truly want to know.  If you just want me to rip off your rose colored glasses and shine a giant, blinding spotlight on your relationship then there is only one thing to do – send you on a lengthy road trip.  Stuck in a car for hours on end, staying in less than desirable motels in places you’ve never heard of and never want to visit again and surviving unscathed gives you a ticket to the express lane of “We do!”  If one of you completes the trip and can’t wait to go again and the other would rather be chased by tiny rabid beavers then to ever do that again, you might want to rethink this whole “live together until we die” thing. 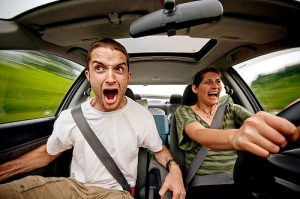 I’m not saying it’s going to prepare you for everything that will come up in a relationship but it will give you an idea of how your soon-to-be significant other will respond to difficult and challenging situations.  Life is hard.  Your relationship should make it easier.

If you decide to just skip all of the nitty-gritty, down and dirty, basement box cleaning stuff – just remember you have been warned.