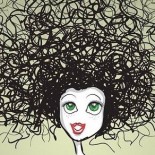 Getting Wet In The Sports Basement Dressing Room

I have apparently missed out on the whole “getting older and wiser” bandwagon.  I am definitely getting older but wiser is somehow becoming more elusive.  This is why I followed the advice of some 20-something clerks at the Sports Basement and attempted to try on wetsuits.  Okay that sounds a bit arbitrary.  It wasn’t like I was just wandering around and someone said, “You should try on some wetsuits” and I thought, that sounds like a mighty fine way to spend a Thursday afternoon.  I volunteered for this humiliating activity because I’m participating in a triathlon camp this weekend, which means I have to swim in a very cold lake and the possibility of hypothermia outweighed the embarrassment of shoving my entire body into a rubber sausage casing. 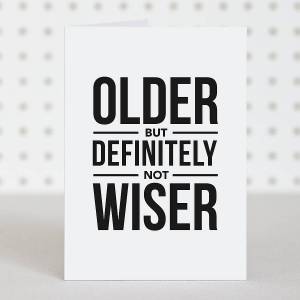 I showed up at Sports Basement to rent a wetsuit because the cost of buying one was more than I paid for my first car.  For that price, I think it should propel itself through the damn water.  Renting one is only $25.00 for the week and since I wasn’t sure how this foray into the unknown world was going to turn out, that seemed like the way to go.  I had called ahead to ask about trying them on and the woman on the other end of the phone explained that it would “take a while” so I should plan on being at the store for a couple of hours.  I unwisely assumed that she meant that it took some time to find the right fit but I would learn that she meant that it took a couple of hours to actually try it on.

The whole process consisted of the following: 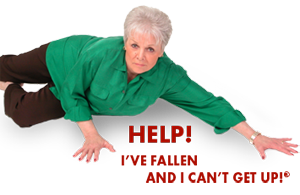 The best way I can explain this is to have you imagine that you are putting on a giant condom that is two sizes too small, thick and made of rubber.  Sounds pretty awesome, right?

After I achieve what I consider a human feat of strength, I exit the dressing room and the clerks explain that I still don’t have it all the way on.  They help me, which takes another 10 minutes, and zip me up and I stand there feeling awkward while they assess the situation.  The female clerk determines that I should try on a different suit since I need room for my boobs.  I thought that should have been obvious from the get go but apparently they needed to see me fully squeezed into this rubber body prison before they could make that determination.  They tell me to peel the suit off like a banana peel and hand me a different suit to try on. 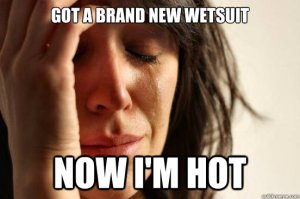 Peeling the suit off “like a banana peel” is easy if you are a banana.  Bananas don’t perspire and their peels aren’t attached to them like freshly pasted wallpaper.  Peeling your wetsuit off is both a huge relief and totally disgusting.  It also made me realized that this torture device which was designed to keep you dry actually made you completely wet.  I sat in confused silence staring at the discarded beast for a full minute before attempting to try on the next suit. 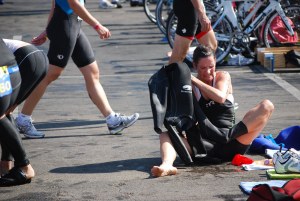 At this point, I turned into Ross from Friends.  There is an episode where Ross decides that he is going to wear leather pants on a date but he gets so hot that he excuses himself and goes into the bathroom to cool off.  He takes down his pants and puts some cold water on his legs and then he can’t get the pants back on.  So as I attempt to put a wetsuit on over my now sweaty body, I realize why Ross couldn’t pull his pants up.  Unfortunately I don’t have anyone to call to help me and I am about 1/3 of the way through the process before I realize that this just might not happen.  I stand in front of the mirror in the dressing room red-faced and sweaty and look at my reflection.  If you ever need an ego check, go try on a wetsuit, you will think bathing suit shopping is a life-affirming event.  I decide that no one can see me like this and forge ahead.

After 10 more minutes of grunting and pulling, I have managed to put on the tortuous device and exit the dressing room to be assessed once again.  They determine that it is sufficient and I head back to attempt the removal process with a little more dignity. I was unsuccessful.  I mean I removed it but there was nothing dignified about what happened in that dressing room.

My suggestion, if you ever find yourself in need of a wetsuit is to buy several online and try them on in the privacy of your own home.  You should spray yourself down with some Pam cooking spray and make sure no one within a mile of you has a recording device available to them and then Houdini your way into as many rubber suits as you would like, until you find one that doesn’t make you feel like this: 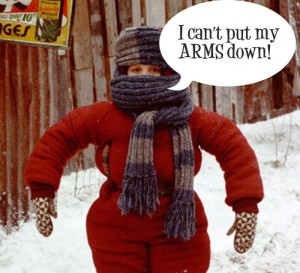 You have been warned.

This entry was posted on March 15, 2015 by Michelle King in A Day in the Life, Batty, Blog and tagged banana, hot, human condom, sports basement, sweaty, triathlon, wet, wetsuit.