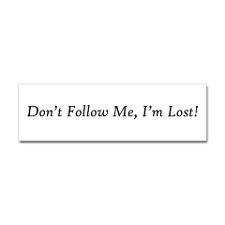 The Batty Broad’s husband decided to point out to that maybe the Batty Broad’s children wouldn’t be so lost all the time if they weren’t missing the crucial navigation gene.  It’s true.  I have somehow passed on my inability to find where I am going or sometimes figure out where I am, down to my children.  If the Batty Broad’s husband would like to blog about my antics then he’s just going to have to start his own damn blog because I cannot expose how deeply challenged I am in this area to the general public.  I’m afraid that I might be required to drive in a special car with warning stickers and that would just be too damn embarrassing even for me.

Just for the record, it’s because I have a photographic memory (impressive I know, hold your applause for later) that gets me into trouble.  I have to picture everything so as soon as someone says go East or West or any of those other compassy directions, suddenly my mind goes blank.  It’s like someone turned out the lights.  Well, I mean honestly, draw me a picture of “East”.  Ha!  You would have to know where I am to even show me East now wouldn’t you?  And I happen to leave on the East Coast – yes of course I know where that is.  At one time it was a bit sketchy but I’ve been here for 16 years now so I’ve got it down.

The other problem is that I grew up on the West Coast.  Which by the way isn’t really a problem because the West Coast is completely awesome but it does hurt one’s driving ability in other areas of our great country.  It doesn’t seem like it should be difficult but let me draw you a comparison.  If I want to go from Mexico to Canada and I’m traveling up the West Coast, I can do this on one road – Highway 5.  It’s wide, it’s FULLY lit and there are plenty of signs.  If I however want to go to let’s say Washington DC from where I live in Pennsylvania (a mere 2 hours away) the directions take up two pages and look like a diagram for a nuclear bomb.  There is something called the “Inner Loop” and of course that means there is an “Outer Loop” and trust me depending on which one you take you could end up stuck in a 4 hour traffic jam.  Not to mention that there are NO lights, the street signs are confusing (when you can see them) and when they are there they often don’t make any sense.   The other issue is that everyone who lives here has lived here FOREVER.  I mean it, they don’t leave EVER.  So they have adopted such interesting things as referring to a particular route (highway) as the “Blue Route” because when they were building it there were three different route choices and they ended up going with the blue one.  I kid you not.  Of course if you are not from here and someone tells you to “take the Blue Route” you might just get a little lost since it’s actually Route 476!  Yes I am rolling my eyes several times now.  The Batty Broad cannot function in a world where people not only refer to compassy (yes I know this isn’t a word but you know what I mean) directions  but they call the roads you are supposed to travel on by some other name then what they are actually called.  It’s like there is a secret navigation club and I clearly don’t belong to it.  In fact, I think I’ve been getting hazed for the past 16 years and frankly I’m never getting in.

If all of that isn’t enough to make you not want to leave your driveway, let’s add in the additional family game that I like to call “what street am I?”  It goes a little something like this.  You are driving somewhere, you even have directions and you turn on to a road and start driving.  You may at some point pass an intersection where you notice that the street that you were driving down now HAS A NEW NAME.  Wait a minute, did I miss a turn?  How did I get on this road?  No, folks it’s not your imagination and no, you aren’t seeing things.  Isn’t this fun?  No, it’s because the street has changed names.  What causes this strange phenomenon I’m not sure.  There are a lot of “townships” so maybe when you cross over from one to the other they change names?  I can just see the rabid inbred town hall fight that ensues over one township wanting it to be John Street and the other wanting it to be James Street.  This is what happens when you never leave the place you grew up in.  Pack your bags now.

Finally, to really top things off we have the family game you can play at home called “I Don’t Know How to Tell You Where I Live“.  No, I am not kidding.  This is how you play.  Someone invites you or the kids or the family over to their house.  You get an address but you aren’t sure how to get there.  So you call up the host and ask for directions.  Note:  If you are ever visiting Pennsylvania do not attempt this, you will end up in Delaware.  Although they have tax free shopping so it won’t be all bad. The host says (and again I’m not kidding) well do you know where such and such is?  Now this would be fine if you live in a town where EVERYONE knows where such and such is but the such and such that they are referring to is something like “the big red barn on hollow road” (like there is only one of those); “the farmhouse where there are a lot of animals in the yard” (again, like there is only one of those) or better yet “do you know where so and so lives” (um, that would be no).  They CANNOT tell you how to get to their house.  No one pays attention to street signs here, even the people who live here!

But wait, there’s more!  I left of the two most important things you need to know about driving on the East Coast but particularly Pennsylvania.

Number 1 – BEWARE OF THE TURNPIKE.  Don’t ask me what a turnpike is because I know one thing for sure YOU CAN’T TURN AROUND ON IT.  The word turn is clearly a misnomer.  Probably made up by that secret navigation club that won’t let me be a member.  It’s not like you can’t ever turn around.  But if you get on going the wrong direction you may not be able to exit for at least 30 MILES.  I know, crazy, right?

Number 2 – BRING SOME CASH, WE DON’T TAKE CHECKS – Plus for the privilege of driving down the road on the turnpike that you can’t get off of for many miles (hope you don’t have to pee!) you get to pay.  Yep, you can get off the turn pike but 30 miles later they would like some cash to let you out.  And you gladly pay just so you can get the hell off of there.

The Batty Broad’s husband refuses to buy her GPS because he says that I will just call him anyway so what’s the point.  Well I need to call someone.  I can’t yell at the GPS when it’s lying to me.  Plus I need to run through my on-going aggravated diatribe about how there are no street signs (and I mean at MAJOR intersections), or if there are street signs you can’t see them (no lights) and that streets change name in the middle of driving down them!  Plus I may get stuck on a road going the wrong direction and I have to pay to get out.  Who designed this system, the Gulag?

So despite my admitted deficiencies in the direction department, I plead justifiable lostness.  Just to leave my house I need a cell phone, compass (yes I can use one), maps of every state and county in a 800 mile radius, a cross staff, a sextant, a seeing eye dog and a monkey.  Okay so I don’t really need the monkey but they’re  so cute and if I get really lost maybe I can play the organ and get some spare change so I can pay to get off whatever damn road I am lost on.

You’re never coming to visit me now, are you?